Head on Collision with a School Bus 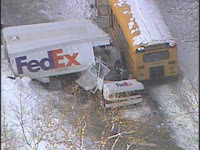 A couple years ago, my friend Nick Mancino (pictured below) had a head-on collision with a school bus (pictured left) and survived to tell about it. Here's his unbelievable story:

"One afternoon on January 2, 2008, I was in Windham, NH, driving my Fedex truck, which was a box truck. I took a right hand turn onto a side road, got distracted and slammed head-on into a school bus. When we hit, it tore the box right off the truck. Snow came dumping down from the top of the bus onto me. I remember seeing debris flying all over the cab. Shattered glass showered all over me. My eyes were open during impact, as I was fully aware that I hit something not knowing what it was at the time.

When I came to a stop, the cab of my truck was completely gone. The only thing that was intact was the seat I was sitting in. The rest of the vehicle was destroyed. My immediate concern was for the children in the bus. 27 children escaped injury. There are no seat belts on school buses. I was so glad to hear that none of them were hurt. It was a miracle. This could have been a deadly accident. The news broadcasts said I was in serious condition, but I wasn't. As it was, I escaped with only minor injuries and walked away with the Lord’s protection.

If I could have 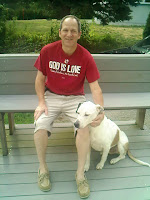 seen in the spiritual realm that day I know that I would have seen angels with their wings mantled over my truck and the school bus, as a bird of prey mantles over its quarry. If you have ever seen birds do this, once the prey is subdued, the bird usually 'mantles', spreading its wings out and over the prey. Mantling shields the prey from theft by other birds. That's what I imagine the angels must have done to protect me and the passengers on that bus.

I spoke to the lieutenant of the fire department a few days later and he said that in all his years of service he had never seen an accident of this magnitude on a secondary road. He said that usually you see accidents like this on interstates. I could have gone home to be with the Lord that day. I guess in one sense you can say that I died that day. My life will never be the same. My identity is in HIM, and now I take life one day at a time!"

You can still find the original news story of Nick's accident online. It has some excellent close up video footage of the accident scene. In that footage and in the photo above, you can see that the only thing left to the passenger cabin of Nick's truck was the seat he was sitting in. He came very close to death that day. What an incredible testimony of God's protection!

I'm reminded of the passage in God's Word that says: "Come now, you who say, 'Today or tomorrow we will go to such and such a city, and spend a year there and engage in business and make a profit.' Yet you do not know what your life will be like tomorrow. You are just a vapor that appears for a little while and then vanishes away. Instead, you ought to say, 'If the Lord wills, we will live and also do this or that.' " (Jam 4:13-15). We all need to be reminded once in a while how precious and brief our lives are. And we need to live for the Lord very day, knowing that it's only if He wills that we will live another day.

Do You Want to Know Him?
If you want to know Jesus personally, you can. It all begins when you repent and believe in Jesus.  Do you know what God's Word, the Bible says?

Please see my explanation of this in my post called "Do You Want to Know Jesus?"
Posted by Len at 3:41 PM