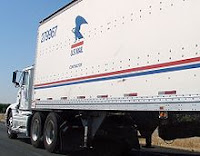 This is an amazing testimony from my friend Dan Kelley (pictured below). He recently shared it with me and I was so blessed by it that I would like to share it with others. He said:

"I used to haul US mail for the post office in a semi tractor-trailer. My runs were each around eight hours round trip late at night, beginning around midnight. Around 11 PM on October 14, 1998, I left Nashua, NH with a load of mail. As I was traveling north on the Route 3 Everette Turnpike in Merrimack, I fell asleep at the wheel. I woke up and saw that I was about to collide with the guardrail. But when I jerked the steering wheel, the truck careened across two lanes and I took out seventy feet of guardrail before smashing head-on into the abutments supporting an overpass road above the turnpike. I never had a chance to touch the brakes, so I hit the pillars at 65 miles per hour. I completely took out the first pillar and cracked the second one, coming to a stop under the overpass. The rear window of my cab blew out and I had shattered glass all over me. 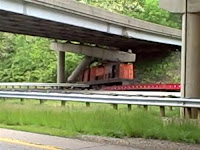 I panicked because my seat belt was stuck and I couldn’t open my door. As I turned my head to the left and looked out the driver’s side window, a man standing next to my truck told me to calm down. I did calm down and finally got my seat belt to release. I climbed out through the broken window in the rear of the cab. I went and lay down on the embankment on the side of the road and fell asleep. I woke up as the paramedics were checking me. When the State Trooper asked me what happened, I told him I didn’t know. I said, 'You might want to ask the man that was there when it happened. He would probably know better than me.' The trooper replied, 'There was no one at the scene when it happened.' So I know that was one great big angel that spoke to me and God sent him to protect me.

I had been driving a 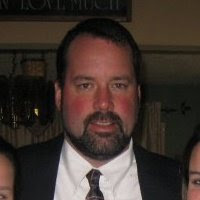 new truck and it was completely demolished. The motor came completely out of the truck. The tires and both fuel tanks came off as well. The police did not want to move my trailer, because it was the only thing holding up the overpass. My only injuries were a bad cut to my thumb and I hurt my knee. The paramedics could not believe it. They said they have never seen anyone in an accident like this with such light injuries. It was a true miracle. I spent a night in the hospital and when they released me with my clothes in a bag, the clothes reeked of diesel fuel. That’s because I had been lying in a pool of fuel on the side of the road. I’m sure that if anyone had been at the scene of the accident, they would have pulled me out of that spot to a safer place.

Through this accident, I discovered I had sleep apnea and was able to seek treatment for that. I also discovered that truck driving was not God’s calling for my life. So I returned to plumbing, where I experience much more of His peace and satisfaction. It also started me on a journey in which I gave my life to Jesus Christ six years later in December 2004. "

When I think of Dan's story, I am completely amazed by the powerful protection of God that he experienced. I'm reminded of the passage in God's Word that says, "For He will give His angels charge concerning you, To guard you in all your ways." (Psa 91:11). If you have ever seen how they build those highway overpass abutments, they are built solid. You can find photos of this online like this one. And you'll see that these are made from concrete reinforced with steel rebar. For Dan's truck to completely take out the first abutment and crack the second one, the amount of force with which he struck them had to be enormous. I'm picturing those videos of crash test dummies when the test car slams into the wall, except that Dan did not have air bags. I'm surprised that the truck did not go up in flames. Accidents like this are quite often fatal. And the fact that Dan walked away from this alive with only light injuries is evidence that a real miracle happened. I have no doubt that the "man" he saw, who told him to calm down, was the angel of God that saved his life that night.

*The photo is not from this same accident, but a similar one.

Do You Want to Know Him?
If you want to know Jesus personally, you can. It all begins when you repent and believe in Jesus.  Do you know what God's Word, the Bible says?

Please see my explanation of this in my post called "Do You Want to Know Jesus?"
Posted by Len at 3:08 PM